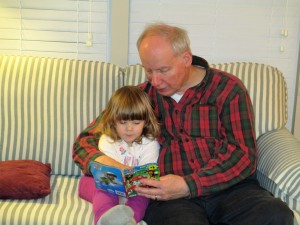 BIO:   Sam Whatley’s articles have appeared in newspapers, magazines and books on various subjects, but his favorite subject remains the Christian life, as expressed in his column in River Regions Journey. This book is the second collection of these columns. Sam is currently a retirement counselor for the State of Alabama. Prior to that he spent 30 years with the US Postal Service. He holds degrees from Troy University and the University of Alabama. Sam and his wife, Debi, have three grown children and live in Montgomery, Alabama. Sam’s hobbies include teaching children to play chess and researching ancient history.

Describe “Ponder Anew:”
Ponder Anew is the second book in a series called Pondering the Journey. The journey in question is the Christian journey from seeking the Lord, to finding Him, to sharing His gospel with others. It’s also a journey as we struggle to remain faithful in the ups and downs of daily life.

Like the first volume, this is a collection of thirty-one short articles that first appeared in my monthly column in River Region’s Journey Magazine in Montgomery, Alabama. These brief chapters are intended to be read one or two per day, like a daily devotional. I call them ponderings. The stories are taken from nature, history, people I have known, or my own memories or reflections. They are written on a level that almost anyone could understand. Many of these stories are encouraging and inspiring, but some may be challenging to those who feel too comfortable with their faith and with their level of obedience to the Lord.

Life outside of writing:
I retired from the U.S. Postal Service in 2004. I now work as a retirement counselor for the State of Alabama. I enjoy teaching children to play chess. In fact, years ago I coached chess clubs in three elementary schools, taking teams to state and national championships. One of my students represented the United States in one division of the World Children’s Chess Championship for Peace in Warsaw, Poland in 1991. Another of my hobbies is reading and researching ancient history, especially concerning Egypt and Peru. I also enjoy teaching adult Bible studies, although I am not teaching any at this time. My wife and I have three grown children and two grandchildren.

When and why did you begin writing?
I have always wanted to write. I began writing in elementary school. I used to rewrite chapters in children’s novels that I thought ended wrong. I wrote poetry and short stories for literary magazines in college. I wrote little stories for my church newsletter. In 1999 I asked a Christian magazine publisher if I could write a column for free and they took a chance on me. I have written newspaper articles for the Air Force Reserves and two newsletters. I have also edited several novels, a textbook, and other scholarly works. Although I have had columns and articles published in magazines, newspapers, and books, I have always had to make a living at something else.

What inspired you to write this book?
“Ponder Anew” was a natural result of writing more than 100 monthly columns for a Christian magazine. The first collection of thirty-one stories was published in 2002. Although all 500 copies were sold in the first two years, the publisher did not want to reprint the book. Readers began asking me to have it reprinted. I decided to produce a second collection and publish it myself through Essence Publishing.

Why the title “Ponder Anew?”
“Ponder Anew” is from a line in the old hymn, “Praise to the Lord, The Almighty” (words by Joachin Neander, translated from the German by Catherine Winkworth, music by Lobe Den Herren). One line reads:

“Ponder anew what the Almighty can do, if with His love He befriend thee.”

I think that sums up what I am trying to do, show people God’s fingerprints all around us.

What challenges did you encounter in the writing process?
Since I wrote one article each month, the challenge came in seeking what the Lord might be telling me about myself, the Christian Church at large, or some aspect of the natural world that speaks of God’s character. This might involve making several attempts and spending more than a week in prayer. Sometimes I would write the entire article and then discard it for something better. Each article is about 700 words.

How do you get through/avoid writer’s block?
My magazine editor’s deadline is the 15th of each month. My personal deadline is the 1st of each month. I seldom meet my personal deadline, but so far I have always met my editor’s. That gives me two weeks to squirm. I am always looking for ideas, even if I just finished an article. When I was writing a novel I forced myself to write at least 400 words a day, five days a week, even if I felt certain I could not use them.

What kind of research was involved before/during your writing process?
I look for ideas in the Bible, everyday conversations, magazine articles, natural phenomena, the internet, movies, songs, and any other place I can think of. Then I chase down background information through the internet. Finally, I pore through the Scriptures with The NIV Exhaustive Bible Concordance to see what relevance this idea has to the Word of God. Sometimes the entire idea must be turned on its head.

What did you learn while writing this book?
To be honest, to see what I have learned, one would have to read the book, because that is what the book is all about. God’s hand is everywhere. We need only to look to see it.

What is the most difficult kind of scenario for you to write? What, if any, subjects would you never write about as an author?
Aside from my articles I have written two unpublished novels and one unproduced play. I will answer from my experience with those works. The most difficult scenario for me has been the big scene, the climax, where everything gets settled. It’s like when you are shooting pool and there remains only one ball on the table. I tend to clutch when I should move forward in confidence. One reason for that is that I am avoiding scenes of vengeance and promiscuity. Revenge is easy to write and easy to sell, but it is not God’s will for us. The same is true for explicit sex scenes. On the other hand, I have great difficulty showing someone being saved. It seems too holy a subject for me to write. Consequently, Christian publishers have rejected my fiction as being too secular and secular publishers have said it is too religious. Christian historical literary fiction is a very tough sell, but it is what I long to write. It is who I am.

What is your most interesting writing habit?
Before the advent of computers, I wrote an entire Biblical historical novel (taking place in Ancient Egypt) with a ballpoint pen and a clipboard. And I did research in libraries, museums and in Egypt. Now I find that I start writing with a ballpoint pen, write most of my work with the computer, and then edit with a pen. Then I move back and forth between the computer and the pen. Not quite a complete Luddite, I am in transition.

What are you currently working on? Do you have plans for future books?
As always, I have a column due on the 15th of every month. I have enough previously published columns/articles to publish a third book in the Pondering the Journey series. But I will wait to sell “Ponder Anew” first. Next year I plan to revamp one of my two novels and try again to get it published. I have one novel about Aaron, the brother of Moses, as a young man in Egypt before the Exodus and another about an Alabama man who is shot by his brother in 1958 over the ownership of ten acres of land. The second novel is about forgiveness, even when the assailant does not seek forgiveness.

What advice do you have for first-time authors?
Write your heart out. Tell the truth about life. But remember Jesus is the Truth.

What are your favourite writers/books?
I love history and read very little contemporary fiction or nonfiction. I like books that make you think. I read a John Gresham novel occasionally, but not often. There is one exception, the nonfiction book When Heaven and Earth Collide by Alan Cross (New South Books, Montgomery, AL, 2014). This is the best exploration I have seen of the tolerance of racial bigotry that was pervasive in most churches in the Deep South in the United States from colonial times through the 1960s. An older work I like is Oswald Chambers: Abandoned to God, The Life Story of the Author of My Utmost for His Highest by David McCasland (Discovery House Publishers, Grand Rapids, MI 1993). Older still is William L. Shirer’s The Rise and Fall of the Third Reich (Simon and Shuster1959). I would encourage any thinking person to read this detailed history and then look at world events. Odd as it may seem, my favorite history book is a school book published in 1901, The Leading Facts of English History by David H. Montgomery (Ginn & Company, Boston, New York, Chicago, London). No one writes history like a Victorian historian.

What People Are Saying about Ponder Anew….

“Sam Whatley uses a keen awareness to see God in his everyday surroundings, along with his ability to relay important lessons from stories in history, to give us Ponder Anew. Discover simple, yet profound, Biblical truths that will encourage you to contemplate God’s love, grace and desire for Christians as we journey through the ups and downs of life. Sam writes from the heart and on a level anyone can understand, making Ponder Anew a must for your personal Christian library.” -DeAnne Watson, Editor River Region’s Journey Magazine (ReadJourneyMagazine.com), Montgomery Parents Magazine (MontgomeryParents.com)

“Sam Whatley has a wonderful knack for uniting everyday stories with light from the Bible, and by doing so, you will see yourself in both.” -Col. Paul Maykish, USAF